A lot has changed since I reviewed the last major release of this rendering application — HyperShot v1.9 — in early 2009. The software is now sold under the name KeyShot and distributed by Luxion.

A licensing dispute over the software code explains this switch. The original developers retain the technology in the new company, and the good news for users is that the shake-up doesn't seem to have adversely affected the product. In fact, KeyShot 2.1 has improved leaps and bounds beyond its former incarnation.

The second generation of the application for PC and Mac platforms still features amazingly fast previews. Crisp, photorealistic renderings of 3D scenes can display in a matter of seconds. This immediate visual feedback was the big breakthrough when HyperShot debuted, and it still puts KeyShot in a class by itself. The older, but more industry-established, rendering applications give sketchy previews and can take as long as 1 hour or more to produce a final image. In comparison, KeyShot gives designers instant gratification, which continues to be its biggest selling point. 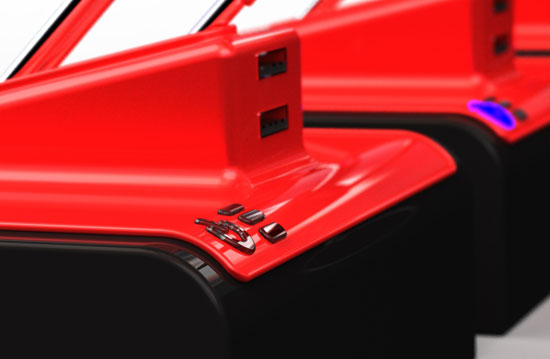 Most designers love KeyShot’s high-resolution previews because of the instant gratification they provide. Within seconds, I can see all the reflections and shadows in the image rather than waiting for the final render.


In actual use, I can feel even more speed in version 2, which according to Luxion has been improved as much as 50% in some areas such as loading 3D data and image processing. 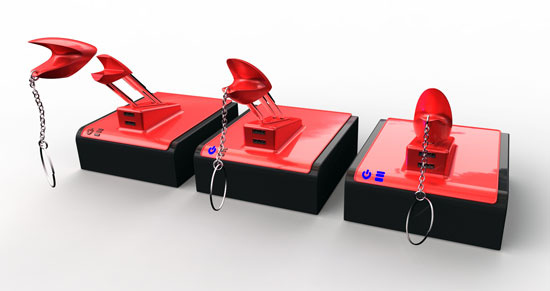 For my rendering experiments with the new KeyShot 2.1, I chose a Rhinoceros model of my own product designs, a security device that prevents others from turning on your PC.


I also felt that I spent less time between commands. Luxion wholly re-engineered the interface, which is much better organized this time around. Switching between tool kits, material palettes, and model options resulted in smooth transitions, so I was able to execute renderings much more fluidly.

A new timesaver in KeyShot 2 interface is its ability to change the model within the rendered scene pretty much effortlessly. You can turn, zoom in on, or resize a model in a single command or even change the depth of field. You immediately see the results of the adjustments in the photorealistic preview, so it doesn't take much time to tweak the composition or experiment with different combinations.

Other new additions — such as grouping surfaces — also speed the design process. You now can select a whole series of surfaces, even on multiple objects, and change their materials or colors en masse.

Fans of HyperShot's automatic ground shadow — the slim, subtle gray spots that convey a feeling of mass to 3D objects — will be glad to see that feature expanded with more options. Users can get the shadows to bend naturally to curved baselines. In my experiments with translucent and transparent materials, I could get the ground shadow to automatically include real-world caustics with the light bending the shadow according to the actual physics of the material. 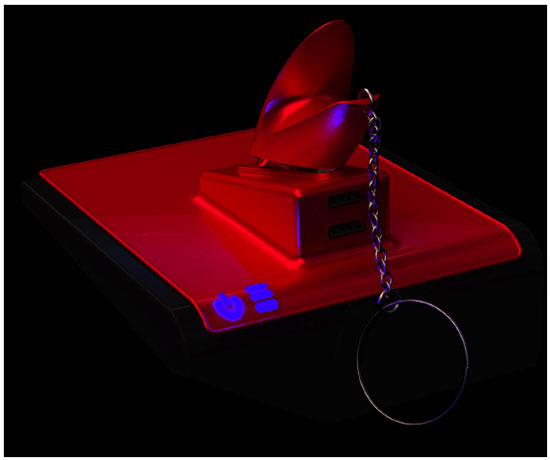 To place lights on your model, as in the power switch on the console here, you simply color the surface in an emissive material from KeyShot’s palette library and edit the color to your liking. KeyShot calculates the indirect illumination in the scene automatically.

In my last review, I requested that the developers give users the option of customizing the keyboard commands. Sadly, no progress was made on that front in the new release. I like to conform my key commands to that of the other major design programs I use, and I simply find it annoying to hit the wrong keystroke out of habit and have to rethink my selection. Most other big design applications let you do this, but it still isn't happening in KeyShot.

Another small issue: Some commands use the middle mouse button, which I don't have usually, so I have to plug in a different mouse whenever I fire up KeyShot. Again, this problem is some mild inconvenience — and one that might not apply to a lot of people — rather than a major bug.

Why Isn't Everyone Using It?

The question that KeyShot 2.1 will pose to many of us is, "Why isn't my company using this product?" In my little corner of the industrial design ecosystem, my peers know about KeyShot technology and know the images are dynamite but might still choose to upgrade to a familiar industry standard. Their product of choice is a few hundred dollars more, and final renders might require a 40-minute wait. KeyShot can produce images that are just as sophisticated in a minute's time. Why, indeed?

The explanation lies in the absorption rate for innovative products. Legacy technology persists through the inertia of familiarity and the office culture that has built up around it. Older, slower software still dominates the design world, but I don't think that will be true for much longer. A relative newcomer, KeyShot v2 holds advantages in nearly all areas: cost, speed, quality, and usability. I see it being adopted first in the case of sole proprietors or small design groups that can manage the migration without much fuss, followed eventually by the larger firms — who will soon be unable to ignore the trend.

About the Author: Gabriel Mathews