Standards are an essential endeavor for CAD managers and probably always will be. After all, if your goal is to get everyone working consistently and efficiently, what better way than to implement great standards? And, if you happen to be a novice CAD manager, don’t worry! Believe me when I say that even veteran CAD managers still struggle with standards.

In this edition of the CAD Manager’s Newsletter, we will continue our Back-to-Basics Boot Camp series with an outline of how to approach your standards program methodically in hopes of getting your whole CAD staff following them. Here goes. 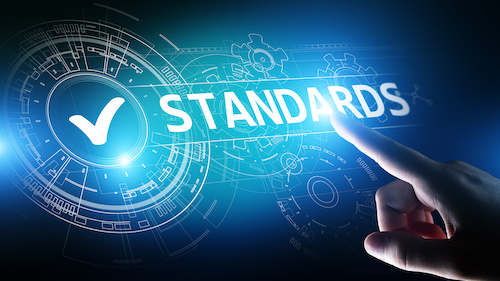 The standards that can best help your users solve problems, prevent errors, and boost productivity.

So, if you are having lots of problems with plotting and file management, but very few problems with correct design standards, you should focus on plotting and file management standards as your first task and put everything else off until later. I know it’s tempting to work on all problems concurrently, but sometimes you have to make a business-focused decision and work on a limited number of problems at the beginning to make the most effective change. So, think through the problems you have and how your standards can help you deal with them and get going.

Create your standards list, prioritize them accordingly, then work on them in order.

Standards documents don’t have to be complicated. In fact, I really like using a “cheat sheet” approach that has minimal text, ample screen captures, and a companion quick demo video.

In fact, I often create my standards documents a bit backwards, where I create an example video first, then take screen captures and text from the video to build standards documents. I don’t labor extensively on written standard sheets; I just want the document to be a memory jogging tool to help users remember what they learned when watching the demo video.

Keep your instructions (written and in video) to a minimum — shorter is always better.

When you create a standard and demo video, do take the time to go review everything and fix any problems you find. Pay particular attention to awkward wording or vague instructions. As you work through the standards, remember that the reason for the standard is to make it easy for users to understand a complex concept.

And, after you make your changes to the standards documents, why not let your trusted power users have a look to get another opinion? You’ll never be sorry that you took the time to make your standards clear, but you’ll always be sorry if you put out a bad standard that raises more questions than it answers.

What video format should you use to deliver your standards videos? These days I render everything to MP4 format as it is supported on the full gamut of Windows and iOS devices. Even though your CAD users may all be on Windows PCs for work, they might want to review standards videos on their iPad or phone.

There might be more compact file formats or streaming formats that work better over low bandwidth connections, but I always use the most commonly available formats simply because everybody can use the files without having to download special CODECs or apps. It just makes things easier.

Use PDF for the documents as it’s supported on all devices.

Now that you’ve got standards saved to digital formats and videos recorded, it is time to think about deploying everything. To link the standards document to your video segments, it’s time to implement infrastructure planning so your files can be available to everyone.

At a minimum, you’ll need a universal naming convention (UNC) and a mapped drive letteror a cloud-based repository with enough space to hold all videos and standards that you will ultimately produce.

Please note that storage you set aside should not be based on what you need now, but on what you’ll need moving forward. And, also be sure everyone has permissions to the resource.

Now that you’ve created a standard video and document, deployed it on your network, and delivered it to your users, what comes next? The next standard! My point here is that standards are never really done because you never run out of problems that you must address. Remember, standards should solve problems, reduce errors, and increase productivity.

Remember that prioritized list you created earlier? It’s now time to move to the next item on that list and start solving the next most important problem.  Of course, as problems change, so will your prioritized list, so do be prepared to adjust but never stop maintaining, prioritizing, and working your list.

How to Deal with Violators

I often hear the question, “I’ve got a couple of users that simply won’t follow standards, even though I’ve gone to their bosses and tried everything — how can I get these users in line?”

Here is the approach I’ve used when dealing with “violators” that has always worked:

If the violator still doesn’t comply, then engaging the violator’s boss likely will help, so long as you can point out how much time and money is being wasted by the violator not following standards. Use this script to explain the problem:

“This user’s lack of adherence to standards has cost us 42 hours of rework on our latest project. At $40/hour average labor cost, this equates to $1,680 (42 x $40) of lost productivity. Imagine the money we could save if this weren’t a problem.”

In my experience, framing standards financially is something that management can’t ignore. Your management is now likely to inform the violators to follow the standards because it makes financial sense to do so.

Note: The violator will likely be mad at you for a few days, but the standards problems should come to a halt.

You should now be able to create and deploy CAD standards in a purely digital format for maximum flexibility and reach. Furthermore, you’ll have standards that also include an audio/video training program so that everyone knows how to use and follow standards. This recipe is a win-win for CAD manager and users alike!

These basic standards strategies have worked for me throughout my career. They are not complicated, but it continues to amaze me how few CAD managers really investigate, prioritize, and organize their standards in a continuous way as I’ve outlined. Try these strategies for yourself and let me know any ideas you may have by dropping me an email. Until next time.