I first explored Autodesk's Project Chronicle — a screen-recording utility that lets you create your own short training videos — in the fall of 2012. As a big fan of video-based training, I liked the fact that Chronicle not only recorded the screen, but also listed the command steps and dialog boxes being used to facilitate user learning. The initial version of Chronicle was limited in that it only supported AutoCAD and it offered very little video editing capability. My initial impression was that Chronicle was a great idea, but was not yet mature.

In the latter half of 2013, Chronicle was developed into a substantial tool that supports Autodesk AutoCAD, AutoCAD LT, Inventor, and Revit, plus vertical products based on these core platforms. Obviously this tool is Autodesk-centric, but since many CAD managers support Autodesk products to some degree, this tool is worth a mention. 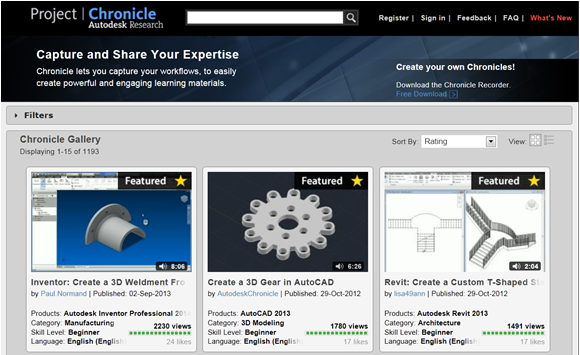 With Autodesk Chronicle, you can make simple how-to videos for your CAD team.

In addition to supporting the most common Autodesk tools, Chronicle also offers these features:

If you've ever produced your own videos using tools such as Camtasia, you'll see that Chronicle is making the transition from a recording utility to a full-featured editing application. While I can't yet do everything in Chronicle that I can in more complete video tools, Chronicle is getting there — and it is certainly worth a look if you need to create video-based learning tools for Autodesk software products. Visit Autodesk's Project Chronicle site to download the software and access the FAQ page.