Software vendors would have you believe that 3D software has taken over the CAD market — but how many companies have actually abandoned 2D?


I've always been fascinated by the discrepancy between how much 3D CAD advertising I see and how much actual 3D usage I observe at my client companies. It appears that the adoption rate of 3D software is far lower than the software companies would have us believe. To verify my suspicions, I started including 3D usage questions in my CAD Manager's Survey years ago.

In this edition of the CAD Manager's Newsletter, I'll share the results of those questions from my latest survey (fall 2010) and compare those with the results with my last tabulated 3D usage results (fall 2008). I think you will find the implications of those statistics interesting. Here goes.

To measure 3D penetration for my 2010 survey, I settled on six categories of 2D/3D usage:

My logic in creating these categories is that a gradual evolution from a purely 2D workflow to a purely 3D workflow is what I've most often observed in the field. In fact, almost all of the companies I've seen that attempted to quit 2D cold turkey experienced implementation problems that led them to adopt an evolutionary strategy in the end.

I asked the CAD managers responding to the survey to base their answers on their companies' 2D and 3D usage, not their own personal usage. I figure nobody knows more about which software is actually being used than the CAD managers. 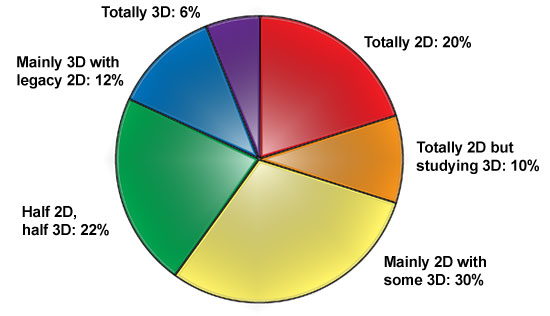 Surprisingly, the Totally 2D and Totally 3D numbers have hardly changed since my 2008 survey, where they were 19% and 6%, respectively.

Furthermore, the number of companies that reported Mainly 2D with some 3D was 51% in the 2008 survey, with the 50/50 split coming in at 24% that year. More on these results shortly.

Here's where the discussion about 2D versus 3D gets interesting, because you can draw almost any conclusion you like depending on how you choose to look at the data. Let me illustrate by extrapolating from the survey data to create a couple of provocative conclusions:

80% of all firms use 3D: By using the subtractive logic that only 20% of firms are completely 2D, you could argue that 80% of companies use 3D, right? Of course, there's no accounting for whether these companies use 3D on production jobs — or for anything more than investigation purposes. In fact, I suspect most of the inflated 3D statistics we encounter are based on this kind of logic.

Only 18% of all firms use 3D: By adding the Totally 3D and Mainly 3D categories you do, indeed, get a value of 18%. However, that number is unrealistically low, because it doesn't include companies where a few departments use 3D workflows while the rest of the firm remains 2D.

As with most things statistical, getting to the truth in 3D usage requires some interpretation of the survey results tempered with observation, rather than blindly quoting the extreme cases for their shock value.

Now let's try to honestly interpret what I think the survey tells us. Here are my conclusions and justifications based on the 2010 data:

60% of firms still have a primarily 2D workflow: This number is simply the sum of those companies that are Totally 2D, Totally 2D but studying 3D, and Mainly 2D with some 3D. This statistic alone suggests that we'll continue to see a lot of AutoCAD, AutoCAD LT, and Microstation for the foreseeable future.

82% of firms use 2D workflows at least half of the time: This number is simply the 60% above plus the 22% that reported half 2D/half 3D usage. Again, 2D seems to be deeply entrenched. And it's interesting that rather than 80% of firms using 3D (as we saw in the False Conclusions section above), the truth seems to be that 80% of firms are still reliant on their 2D tools.

40% of firms use more 3D in half (or more) of their workflows: This number is the sum of companies who report they are half, mainly, or totally reliant on 3D. This is a number that mirrors what I see at my customers' offices.

18% of firms have truly transformed from 2D to 3D: By adding the Totally 3D and Mainly 3D categories, you get the 18% that have left 2D behind almost entirely.

What Does It All Mean?

Like the 2008 survey before it, the 2010 CAD Manager's Survey offers evidence that 3D usage is, in fact, increasing, but is still nowhere near as pervasive as software companies would have us believe.

I continue to believe that firms will use 2D when they can do so profitably, and will only invest in 3D when business purposes justify it. The trick for CAD managers is to help their companies make the transition to 3D — if and when it makes sense.

I wonder what you've experienced with the transition — or not — from 2D to 3D. Do you agree with the conclusions I've drawn here? I invite you to send me your responses at rgreen@cad-manager.com so I can include them in the next issue of the CAD Manager's Newsletter.

In the next issue, I'll give you some practical advice for navigating the 2D-to-3D transition, along with some diagnostics you can use to determine how 3D your firm really needs to be. Until next time.