CAD Manager's Column: Start every new project with this important meeting to make sure all parties understand the project’s goals, who’s in charge, and other important details.


It’s no secret that CAD management has gotten more difficult in recent years, right? A confluence of technical trends, portable devices, local/cloud environments, and an explosion of software apps and tools have really shaken up how CAD gets done. The reality is that there’s simply a lot more to worry about to keep CAD projects coordinated and on track these days. 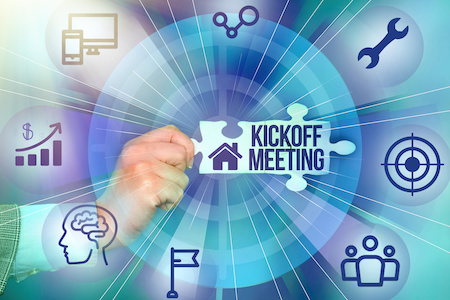 Many CAD managers have gotten so wrapped up in the complexity of it all that they’ve forgotten the secret weapon that can tip the managerial balance back in their favor — the project kickoff meeting. In this edition of the CAD Manager’s Newsletter, I’ll focus on how you can use this classic technique in new ways to help manage even tough new challenges in your environment. Here goes.

Too Busy to be Organized?

It seems like everybody is so busy running around trying to execute projects that fewer among us take the time to get projects started correctly — a mistake that will lead to expensive problems down the road. Have you ever asked yourself, “Why do we have time to do things twice but not right the first time?”

Well, the project kickoff meeting is how you “do things right the first time” and I submit that the need for project kickoff coordination is far greater than it ever has been. When CAD tools were stable and the work environment didn’t change much, project kickoff was just a matter of sharing project standards. No longer. Now we have to think about much, much more, including:

Simply put: there are a lot more variables involved with executing a CAD project than there were just a few years ago, so starting out organized is more crucial than ever. Or, put another way, the price we’ll pay for being disorganized on a given project is now much higher than it was just a few years ago.

Whether the project kickoff meeting is conducted by an architectural or engineering project manager (with you attending as the CAD representative) or whether you run your own kickoff meeting, the goal is still the same — to understand how the project will work from a CAD point of view. Whenever I attend or lead a kickoff meeting, I always ask the following questions and strive to have them answered by the end of the meeting:

My reasoning for insisting on a kickoff meeting is not just to get the above parameters defined, but also to get everybody thinking about the project before work starts. My logic always has been that it's better to start a project in an organized manner and move forward than it is to start with anarchy and try to organize it later.

As the kickoff meeting unfolds, here are the issues I’ll press in each section I’ve outlined above:

Deliverables. What software will be used and which version? Will a filing structure (parts to assemblies, BIM discipline coordination strategies, XREFs to master drawings) be used? What will the 2D geometry and plotting formats (DWG, DGN, PDF, hard copy, etc.) be? How will we track who has what file version?

Project Tools. For the most part, the deliverables defined will dictate the tools to be used on the project.

Timeline. When is everything due, from whom, and to whom?

Who’s in charge. Should anything go wrong, who are the key team members that can resolve the issues?

At the conclusion of this kickoff meeting, everyone should be in agreement as to how the project will be conducted, right? If not, you need to have further discussions until there is agreement!

Once you have consensus on project CAD/BIM procedures, you have a very powerful piece of leverage in your possession: Managerial approval! Now anyone who tries to deviate from project procedures is not just making your CAD management job tougher, they are actually trying to rewrite management’s approved approach for the project — thus potentially compromising deadlines or causing unforeseen technical issues.

Problem 1. A field engineer wants to use a new iPad app we’ll call “CADCloud 1.0” to edit project electrical DWG files, even though the project instructions clearly state that AutoCAD Electrical is the software required for client deliverables.

Problem 2. An architect wants to use her personal Drobox folder to share BIM files with other branch offices even though project instructions clearly state that all work files must be stored on secure company servers.

Problem 3. A project manager is in a hurry to get something sent to a contractor and instructs the CAD personnel to, “Forget doing this in BIM, just do it in AutoCAD, so we can get it done now,” even though other project team members are designing exclusively in BIM tools.

The solution to all these problems? Restate what the project standards are as to at the kickoff meeting and point out that all these proposed changes deviate from them. I would also make the following things clear for each potential problem:

Response to problem 1. We don’t know that changes made in “CADCloud 1.0” will be compatible with our component databases in AutoCAD Electrical, nor do we know what the filing format is from a version control standpoint. The reality here is that the chance of data incompatibility is very high and that could cause big problems in the project.

Response to problem 2: We should never have project data floating around on unsecured personal accounts — ever! This constitutes a danger of exposing client information for which we could be held financially liable at worst, or just losing track of who has the latest files at best.

Response to problem 3: While “just getting things done” is understandable sometimes, bypassing our BIM tools opens the door to coordination and interference errors that would otherwise be caught in a coordinated BIM environment.

I think you can see my approach: Use the agreed upon project standards to make your point and then amplify the response by talking about problems that could be introduced into the project by deviating from the kickoff plan. I’ve found that using these approaches seem to work well. If the problems continue, you at least have a record and will be able to say, “I told you so,” later on, should there be negative consequences.

As technology and tools change our work environment it’s only natural to get caught up in the complexity and feel powerless to control it. However, using classic management techniques like a well-coordinated kickoff meeting really do allow you to gain control of the complexity. By using my suggested project kickoff meeting framework to agree on tools and methods early, you’ll have the authority needed to reduce project variables and risks.

So, remember your key strategy for success — the project kickoff meeting — and use it for every significant project you start. Until next time.