Results of the mini-survey are in, and they suggest that conditions have worsened this year.


For the past month, I've been collecting data for a mini-survey to gauge how the current economic downturn is affecting CAD managers. Following up on a similar survey I conducted in February, I want to determine whether conditions are getting better, growing worse, or staying the same. Given contradictory reports of key economic indicators, rising unemployment rates, government stimulus programs, and other variables in today’s market, I really had no idea what this survey would reveal.

I hoped to have better news to convey, but according to the hundreds of survey respondents, conditions are worsening. In this issue, I'll share some of the data as well as some thoughts and advice related to those results. Here goes.

The short survey was conducted during September 2009 via my web site. In this edition of the CAD Manager's Newsletter, I’ll focus on the response to the following questions:

When I downloaded the data and started sifting through the results, I was impressed by the number of responses (405) and the geographic spread of the sampling. The survey reached all over North America (80% from the United States, 4% from Canada, and 1% from Mexico); the European Union (5%); Australia/New Zealand (5%); and India, South Africa, Japan, and the rest of the Pacific Rim (roughly 1% each).

The sampling is wide enough to suggest that the results can provide a decent representation of the North American, European, and Australian economies. For the purposes of this report, I'll focus on results for all survey respondents globally. I hope you find the information valuable.

The bad news remains bad when it comes to CAD managers’ pay. The survey indicates a continuing trend toward cutting or freezing compensation levels. 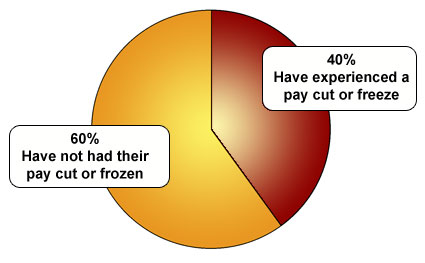 As if this statistic weren't bad enough on its own, consider that these numbers reflect only the CAD managers who still have a job. (My informal survey work indicates that roughly 15% of CAD managers have had their jobs eliminated in the past year.)

To gauge how busy our companies are, I simply asked CAD managers to choose the response that most closely described their companies’ workloads.

The news here has worsened since my last survey, in February. Based on these responses, 50% of companies out there have little to no project work now, as compared with 34% in February. Only 10% of CAD managers reported working in very busy companies, down from 26% in February. On a personal note, I trust this survey more than news reports because I haven't seen any companies getting more work in the past six months, but I have seen plenty of companies where things are getting worse.

I also asked whether the CAD manager's company had layoffs recently. The percentage of firms conducting layoffs (65%) is even worse than in February (60%). My personal experience again bears out these results, as I've seen many companies having layoffs but almost no companies hiring.

Experience has demonstrated to me that when money gets tight, companies cut back on hardware, software, and training budgets. In revisiting this topic, I varied my questions slightly to determine how many companies are no longer maintaining software subscriptions.

One bit of good news is that companies appear slightly more willing to purchase new hardware than they were in February, since purchasing freezes are not as widespread now. 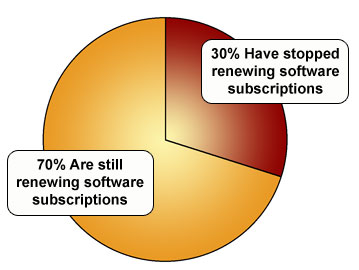 The fact that 30% of companies are not renewing subscriptions must be very chilling to the software companies that have become dependent on the constant stream of annual revenue they provide. I've received e-mails from many frustrated CAD managers who've had to abandon implementing new technology because their company simply has no funding for subscriptions, so I believe the survey results do reflect what’s happening throughout the market.

Finally, the training budget cuts. Conventional wisdom says, when you're not busy, train so you'll be better off once you do become busy again. Not the case in today’s CAD world, says the survey. My survey data over the last two years shows a steady decline in training efforts and budgets.

I asked all survey participants to predict how they think their company will do in the coming year. I realize this polling isn't scientific, but I do think CAD managers probably have a more accurate sense of their companies' futures than does some news reporter quoting random statistics. 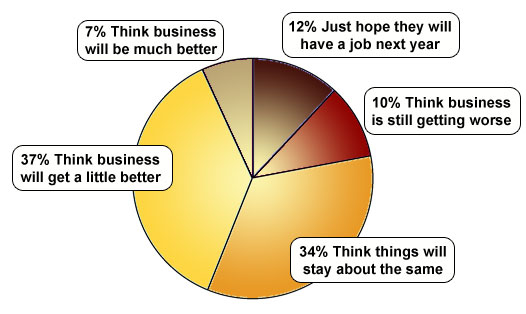 So it appears that the mood of 93% of CAD managers is in the negative-to-slightly-optimistic camp, while only 7% see a very bright year ahead. The genuine lack of positive forecasting troubles me. If CAD managers were hearing good news from their senior management teams, bidding on lots of work, and striving to modernize their companies, I believe I'd see much more optimistic responses.

In the next edition of the CAD Manager's Newsletter, I'll pass along more information from this survey as it relates to CAD management job duties and pressures, and I'll explore some reader feedback on my recent series about building information modeling (BIM).