Tech Trends: DIYers are moving out of the garage and into view of companies offering sophisticated tools and services that fuel creativity.


Editor's Note: This article was originally published in the Summer 2011 issue of Cadalyst magazine.

No longer is the image of the lonely basement woodworker or garage tinkerer an accurate depiction of do-it-yourself (DIY) aficionados. Thanks to fast technological advances in design software, fabrication tools, and the Internet, today's DIYers, or "makers," are embracing CAD and related technologies. The result of their expansion is incredible innovation and creativity. Plus, they're changing the rules of industry by bypassing traditional mass production. Today's makers are shepherding their own products from idea inception through production with the help of DIY services such as TechShop and web sites such as Etsy, CafePress, deviantART, Ponoko, Shapeways, and Kickstarter.

It's been a long time since the playing field was level for tinkerers and inventors. Before the Industrial Revolution, just about anyone with a good idea, a knack for spatial visualization, and enough money to put together a model could create an object, from a simple functional hand tool to an intricately joined furnishing to a precisely tuned scientific instrument. When the Industrial Revolution took hold, cost- and timesaving processes were integrated into production that allowed a tremendous variety and quantity of products to be brought to market. But the assembly line came at a price.

Over time, the tools of mass production became costly and innovation fell to the purview of a few. Subsequently, many creative thinkers without the contacts and resources to capture corporate attention were relegated to basements and garages, and many were left without the technological and financial wherewithal to craft their visions.

The rules of industrialization are changing rapidly. Whereas the Industrial Revolution's technology placed power in the hands of a small group of people, today's technology is providing the means — the tools of design, production, and product proliferation — to all who are interested, Tatjana Dzambazova, senior product manager, Autodesk Consumer Group, says. "In principle, tools that once used to be exclusively for hired professionals, today they find their new interpretation in a cheaper, smaller, mobile version," she says. "Take, for example, a video camera. It [once cost] thousands of dollars. Now you have a little Flip camera and can [record] your own stuff."

Similarly, she adds, "All the tools of production or fabrication [once] were big machines that cost millions of dollars. Now you have 3D printers and small laser cutters — and you can buy one for $1,000 and put it at home" — and become your own small-scale manufacturer.

The popularity of online make-it and sell-it sites such as Etsy, CafePress, deviantART, Ponoko, and Shapeways; magazines such as Make and Wired; and DIY events such as Maker Faire has revealed a previously underserved market that CAD vendors are rushing to meet. Of course, Google's free SketchUp 3D modeling software has been a great boon to those interested in trying CAD but unwilling to pay for spendier products, such as the more feature-rich Google Pro ($495).

Now, traditional CAD vendors including Alibre and Autodesk are producing entry-level CAD programs specifically for this market. Alibre Design PE (Personal Edition) sells for $199, compared with the $999 price tag for the Custom edition and $1,999 for Expert. Alibre CEO Paul Grayson says his company noticed that this movement was growing, but many hobbyists were staying away from even low-end professional CAD programs because of the high cost for an enthusiast, as well as the steep learning curve. 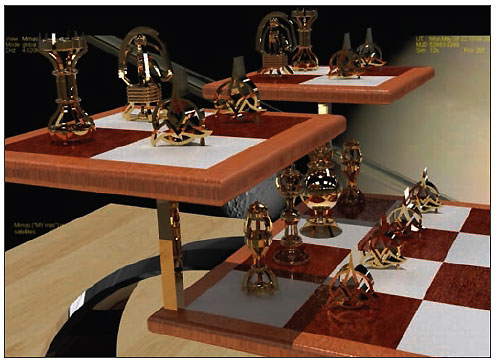 To address the technical knowledge gap of DIYers working with CAD programs, Alibre Design PE eliminates a lot of the functionality a professional designer requires, as well as capabilities DIYers may not want. Max Freeman, Alibre vice-president of marketing, says, "What the Personal Edition lets you do is model your item, and then you can either just go build it from that model or export it to an STL file" for 3D printing.

Partnering with 3D Systems Corporation, Alibre now offers a 3D design and 3D printing bundle for creators, DIYers, and small businesses in a package that starts at less than $1,500. This enables even a hobby-level designer to go from an idea to a 3D model to actually holding the finished product in his or her hands within hours.

Autodesk has penetrated the maker market with free and low-cost tools such as the very popular SketchBook Mobile (a drawing and painting app for iOS and Android devices), Homestyler (a web-based home and interior design application), and TinkerBox (a puzzle game for iOS devices, designed to make engineering fun). At this spring's Wired Business Conference, Autodesk CEO Carl Bass announced the launch of Autodesk 123D, a free web-based service for non-professionals that provides 3D modeling software, 3D starter content, and accesss to fabrication services. 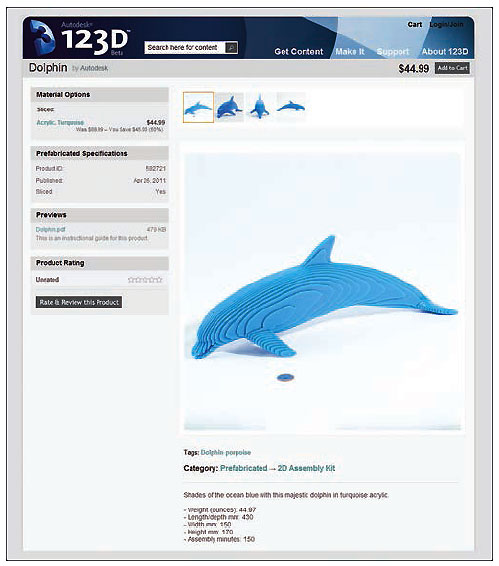 Autodesk is targeting amateur designers with its 123D web service, now in beta testing, which allows users to create 3D models from scratch or based on free 3D starter content, then have the item fabricated.


Where Makers Work Out

To reach a greater swath of the maker market, Autodesk is partnering with Ponoko and San Francisco–based TechShop, a brick-and-mortar DIY design and fabrication shop.

"We believe TechShop will be a big enabler," says Dzambazova. "This is starting to become a real inspirational movement where the audience starts to understand that all the fabrication methods are really here to empower them to be more entrepreneurial and to express their creativity."

For a monthly fee, TechShop members have access to professional-grade tools such as industrial sewing machines, 3D printers, laser cutters, tubing and metal bending machines, and a ShopBot CNC (computer numerical control) router.
Professional modeling software such as Inventor and SolidWorks is also available, as is training.

TechShop CEO Mark Hatch says that the idea for a membership-based workshop was born of necessity. He describes Jim Newton, founder and chairman of the board, as an "übermaker" with a lengthy list of new product ideas. "He tried to find a local machine shop that would let him rent space by the hour or the month and was stunned when he discovered there was no such thing. He took his idea to a Maker Faire and walked away with 250 potential members and the beginning of the business plan," says Hatch.

Hatch estimates that 25% of TechShop members are using the available CAD software, although he figures that number rises to nearly 70% if you factor in entry-level drawing programs such as CorelDRAW. Learning CAD in a workshop is "not for the faint of heart," he says, "but we routinely teach people how to produce decent products after two class sessions. We have people who have launched businesses after taking two or three classes."

Hatch is quick to point out that those entrepreneurs typically are producing a fairly simple product that lacks the multilayered elegance and complexity of an architectural or engineering project. However, they can use a basic knowledge of CAD to address problems such as where to place a camera strap or how to protect an iPad in a sustainable fashion. 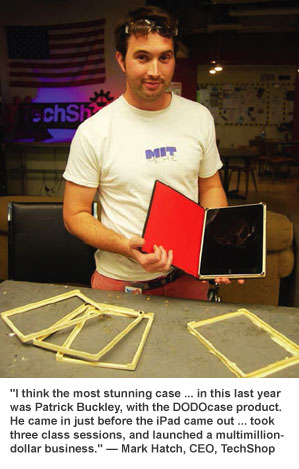 "I think the most stunning case of that in this last year was Patrick Buckley, with the DODOcase product," Hatch says. "He came in just before the iPad came out, asked the instructors what classes he should take to learn how to build a bamboobased iPad cover, took three class sessions, and launched a multimillion-dollar business inside of a few months."

Another example of a successful product launch generated from TechShop is the C-Loop Camera Strap Mount, by Custom SLR. Hatch explains the idea behind the C-Loop came from a couple of professional photographers who had become irritated with traditional camera straps because they always were in the way. Their idea was to create a strap that mounts on the bottom of the camera, where the tripod normally attaches. "They took the classes, took the CNC design class and the CNC machining class, and built their first prototype. They took some photos, launched a Kickstarter project, raised [more than] $63,000, and launched their company — in months!"

Hatch, whose background is in business and product development, believes that what TechShop provides is nothing short of revolutionary. "I know how difficult it is to produce a professional-looking, viable prototype or to make the first 500–1,000 of something, because it's always been one of the biggest stumbling blocks in launching a new product. This is the least [expensive], most powerful method for launching a new product or new company in all of human history."

Indeed, today's inventors and hobbyists now have the means to design, fabricate, and distribute their creations without tremendous concern for cost and scale. Drawing inspiration from a community of makers and producing on-demand with these revolutionary 3D CAD, fabrication, and social networking tools at their disposal, the maker movement is poised to democratize the invention/production process, unleashing a wave of creativity and originality that ultimately will benefit all.