The ability to refine product concepts in real time using 3D mechanical CAD software has revolutionized the design of everything from jewelry to shoes to motorcycle parts. That's what the founders of Truly Blessed Customs discovered three years ago, when they started working on a neo-gothic air cleaner for a one-off custom bike. The unique cross shape was modeled with Alibre Design 3D CAD software, digitally prototyped by RedEye On Demand, and is now available to motorcycle enthusiasts everywhere.

In the beginning, Ray Chavez didn't intend to start his own company — he just wanted to buy a motorcycle to enliven his daily commute to the Los Alamos National Laboratory. Like many other residents of Santa Fe, New Mexico, Chavez has a flair for design and aesthetics; it's estimated that one in six of his fellow citizens is employed by the art industry. So it's not surprising that he was interested in creating a custom bike instead of buying a mass-produced model.

Chavez collaborated with Aric Singletary, a designer from Augusta, Georgia, to build the bike. With a custom frame from West Coast Choppers and an Ultima El Bruto Competition Series big-bore 113-cubic-inch engine, the bike dubbed "Don Diego" was off to a great start. To finalize his vision, Chavez wanted to use a cross-shaped air cleaner, but there were none available on the market. 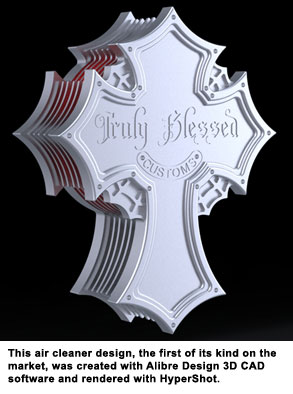 That didn't discourage Chavez, who drew up a sketch of what he had in mind. Singletary then refined the design, adding the spider web elements to create a rounded shape that would accommodate a standard cylindrical K&N air filter. The result was visually striking, but with 35 component parts, the design would be very expensive to manufacture. Chavez and Singletary decided they needed the skills of a professional designer, so they enlisted Jessie Nichols of Brainchild Enterprises.

Nichols is a professional design engineer as well as a reseller of Alibre software. He used Alibre Design to turn the sketches into a 3D, manufacturable design. Nichols drew on his experience and the capabilities of the parametric modeling software — which responds to design changes in real time, allowing the user to immediately see the impact of kerfing an edge or boring a bolt hole, for example — to dramatically simplify the structure of the air cleaner, reducing the number of components to just two. After engineering, the design was prototyped by RedEye On Demand. Working from Nichols's Alibre Design files, RedEye printed 3D models of the air cleaner. The prototypes spurred some changes to the final design, such as machining the mounting screws into the back of the face plate, rather than through it, so the bolt holes wouldn't detract from the logo text.

Setting Up Shop in the High Desert

The success of the cross project wasn't limited to just one bike. As the three designers collaborated, they soon thought of sharing the unique air cleaner design with other motorcycle enthusiasts. Chavez and Singletary founded Truly Blessed Customs, a collaborative shop that creates original and custom bikes and parts.

What had originally been designed as a one-off item became the company's first product, as well as the first cross-shaped air cleaner on the market for V-twin motorcycle engines using S&S carburetors (or, with an adapter, Mikuni/CV carburetors). In six months, the cross had evolved from concept to product. 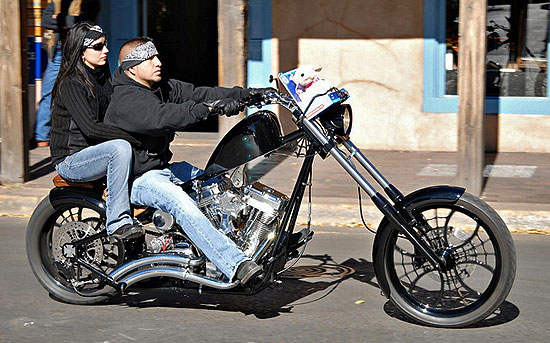 Ray Chavez and his wife ride the custom bike Don Diego in a Toys for Tots event. The cross-shaped air cleaner is visible to the right of Ray's knee.

A manufacturer in California, working from the CAD files, produces fewer than 100 of the crosses at a time. The aircraft-grade 6064 aluminum and high polish contribute to making the custom air cleaners ($400) about four times more expensive than their standard counterparts. "There is a price to be paid for being unique," Chavez said.

Central to that singular style is the Truly Blessed logo design, which typifies Chavez and Singletary's vision of a strong, yet spiritual look for their artistic creations. Customers can also purchase units without the logo, instead engraving the name of a bike, motorcycle club, or even a deceased loved one on the cross.

Not content to offer one design, Truly Blessed launched a new web site last year and has added two more air cleaners to its catalog, including the "Dead Memories" skull design. Images of the air cleaners featured on the site are not photographs, but renderings created using the HyperShot rendering technology inside Alibre Design.

"We are pretty excited by this new project," said Nichols. "Ray has true vision, and it's great fun to take his artistic design and make it a reality." Describing the skull design, Nichols said, "The entire part is aluminum, which keeps cost and weight down and allows for polishing to resemble chrome plating, and if a customer wants color, it can be anodized." Rivets and plates made of brass contrast with the aluminum, highlighting the eyes and nose.

As is true for the cross design, slats surround the skull to allow for maximum air flow, and theft-resistant bolts secure the air cleaner to the engine. The custom text of the Truly Blessed brand is back as well, arranged in a semicircle this time. "It was the most difficult element of the design," said Nichols. "I used advanced Alibre Design utilities to get the text placed just right on the skull." 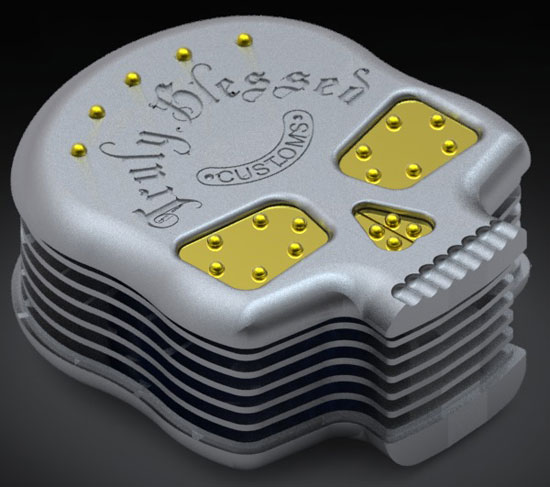 The elaborate custom font and curved text used in this logo posed a challenge to designer Jessie Nichols,  who used Alibre Design utilities to place the text.

In addition to the air cleaner line, Truly Blessed will also be offering products such as foot controls, risers, license plate holders, and keychains. Many of these items are currently in the design phase and will be available soon. Just this month, a new air cleaner — the "Spanish Armor" shield motif — was added to the company's catalog. 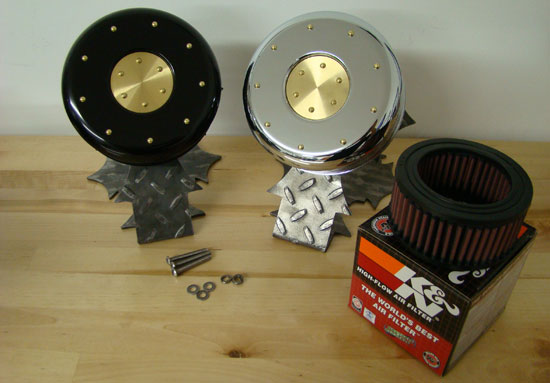 All of Truly Blessed's air cleaners — including the Spanish Armor design, shown in two different finishes — were designed to accommodate a standard cylindrical K&N air filter.

Truly Blessed and Brainchild will also work directly with customers to help them bring their own visions to life, whether parts or entire bikes, using Alibre Design to prepare the designs for manufacturing. "Our goal is to bring new and unique product designs to our customers," said Chavez.