Powerful 3D modeling applications are often put to use in designing the nuts and bolts of life — objects that are essential, but often prosaic. Occasionally, however, the items being modeled are whimsical playthings, and the designers are, well, elves. If this description calls the North Pole to mind, envision someplace a little warmer instead. Hot Buttered Elves is a small Los Angeles company that uses virtual 3D modeling to develop toys and collectibles, sculpt product prototypes, and create special effects for movies and animated characters for games.

The Elves recently designed a new line of dimensional wall decorations for children's rooms using SensAble's FreeForm Modeling Plus system. FreeForm is a touch-enabled, sculptural CAD system that is used to design complex, highly detailed organic shapes for industries ranging from jewelry to dentistry. Unlike traditional mathematical-based modelers, FreeForm is based on voxel technology, which removes the constraints of topology (mathematical definition, geometry format, and order of operation). As a result, it provides unparalleled creative freedom, speed, and flexibility when modeling intricate organic shapes, according to the Elves.

Originally introduced as part of a fundraiser program for children's hospitals, the stick-on wall decorations — called Wallables — have since grown into a diverse line of consumer products. They depict a range of shapes, including letters and licensed characters. The Elves credit the FreeForm modeling system for allowing them to develop the complex designs quickly and cost-effectively.

According to Matt Gavlick and Markus Maciel, the two lead Hot Buttered Elves designers who created the Wallables, SensAble’s FreeForm system is a natural fit for any company that has its roots in hand sculpting. Maciel explained that it's easier for a traditional sculptor to transition to the "virtual clay environment" of FreeForm than to other types of CAD programs. "If you're a traditional sculptor," he said, "FreeForm is one of the easiest software programs to use to move yourself into the 3D world ... it's kind of like the stepping stone from hand-sculpting to the digital world.”

FreeForm enables digital sculptors to design with virtual clay by using a PHANTOM haptic device instead of a mouse. As designers push, pull, deform, and extrude virtual clay to sculpt the on-screen 3D model, they actually feel the force feedback on their hand, just as if they were working with real clay. 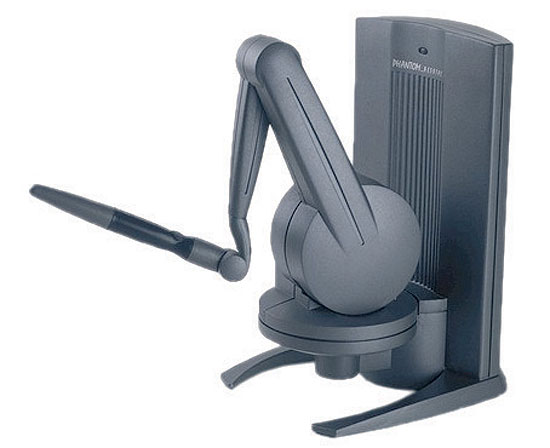 The PHANTOM haptic device enables users to interact with the FreeForm software as if they were holding a sculpting tool and working with clay.

Digital tool palettes allow users to experiment with form creation, add sculptural details and textures, and make adjustments from the inside of the model. This type of 3D modeling speeds the product design process by allowing sculptors to first create whatever they desire, and then work interactively with the engineers on their team to prepare the model for manufacturing.

One of the Jungle Sweeties Wallables being designed with FreeForm, left, and the finished product after manufacturing, right.

Gavlick began using the software about three years ago, and soon wanted to make it an integral part of the Elves' workflow. Today, although the team still uses hand sculpting for certain unusual projects, "the software is our key focus and key strength," he explained. Because Hot Buttered Elves has only about seven employees and serves many clients who have short deadlines, the company is often juggling multiple projects and employs whichever methods are the fastest. "We have to vary our approach and the tools we use depending on the project at hand," said Maciel.

In addition to FreeForm, the Elves also use a variety of digital tools including Rhino, a Windows-based NURBS modeling system from McNeel; and ZBrush, a 3D digital sculpting and painting tool from Pixologic. When working from a 2D image, said Maciel, they use Adobe Photoshop and/or Illustrator to bring image planes into FreeForm to serve as a template. "Nowadays, in this digital world, you have to be very flexible," he observed. "No [single piece of] software can solve everything."

According to the Elves, the SensAble application enabled them to finish the Wallables designs in half the time it would take to sculpt them by hand or design them using a typical parametric CAD program. One of biggest obstacles to completing projects promptly, Maciel said, is making alterations to a design; in FreeForm, the designers can turn around those changes in minutes instead of hours or days.

Gavlick concurred, noting that FreeForm allows designers to compare the computer model side by side with a reference picture as they work, helping speed the refinement process. In addition, Hot Buttered Elves can quickly prepare prototypes on site using a 3D Systems ThermoJet 3D printer. The company also creates RP (rapid prototyping) models on Objet Connex and envisionTEC 3D printers. These samples, formed of a curable, rigid composite material similar to ABS plastic, can be primed and sent off to Hot Buttered Elves' manufacturing partner for tooling along with the digital files, Gavlick said. 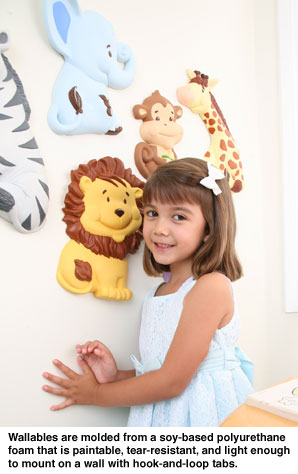 Designing a model that faithfully replicates an artist's vision or a well-known cartoon character is a challenging task, but the job doesn't end there. The designers also must consider the difficulty of manufacturing each item — increased complexity translates into increased cost.

Although the Wallables are only a couple of inches thick, they are deeply sculpted in bas-relief to give the appearance of full 3D. Designers must plan for complex part lines in the manufacturing of clamshell molds while avoiding undercuts. Without the help of FreeForm's undercut tool, said the Elves, errors can arise that double or triple the molding costs. FreeForm includes a parting line evaluation feature to help designers make the necessary adjustments early in the design process.

The Wallables are crafted from a soy-based polyurethane foam created with RENUVA technology. This Dow Chemical Company initiative seeks to incorporate more renewable content in the manufacture of products such as carpeting, adhesives, and shoes. Thanks to the use of soybean oil, the RENUVA foam is made with 60 percent less fossil fuel than traditional polyol foams. At the same time, the proprietary formulation preserves intricate detail, has a thicker skin, and resists tearing.

According to Maciel, it was a challenge to find a safe, paintable foam option with the right density to provide softness, tear strength, and durability that could accurately reflect the sculptural nature and intricacies of the original digital design.

"We wanted to switch to a more eco-friendly, renewable product," said Gavlick, explaining the company's decision to begin using the new foam earlier this year. "During the development process, we checked out a lot of different materials that were similar; for us, it was the best fit."

From Screen to Shelf

According to Gavlick, the new Wallables are in production, and will go on sale in February 2010 at retail outlets such as Toys "R" Us. Regarding the approximately 15 designs currently being prepared, Maciel said, "The response internally and from [the company that owns the licensed characters] has been great. They are extremely happy with how we’ve brought some of their most endearing licensed characters to life in the form of a 'green' Wallable."

Although taking a design from concept to consumer product is a demanding process, Gavlick said he enjoys the challenge. "One of best things about working in this industry is that every single job that comes in has its own complications or hurdles ... you have to be willing to change your style. I think that's what makes this job fun."

"Don't be afraid," Maciel advised his fellow designers who might be hesitant to try new tools. "The digital world is changing every day — you could be using new software tomorrow."