What could please a virtual rock star more than having his or her persona brought to life for all to admire? That’s what can happen for personalized avatars in the popular Rock Band 2 video game. With the help of some expert file translation and 3D printing technology, video game fans can have their animated selves, called Bandmates, produced as a real-world figurines.

Rock Band from Harmonix challenges players to form a band and tour for fame and fortune -- all while learning to master the guitar, drums, or vocals. Players create personalized characters, or avatars, to represent themselves during play. With the introduction of Rock Band 2 late last summer, those same players now can visit rockband.com to order 3D physical models that reflect their digital rock persona, style, and musical instrument. The customer previews the model from eight perspectives and selects from a variety of poses of the piece before finalizing the order. Finished models are 5” to 6” tall and sell for $69 each.

Once an order is placed, a file-translation application written by James Fleming, senior programmer at Harmonix, and a team of programmers receives the avatar details, adds assets associated with the video game (such as the musical instrument or jewelry), and poses the model. The process “runs some physics to put the avatar in motion,” Fleming explained, such as giving hair and clothing the appearance of movement. “The resulting model has a low polygon count, so we use a technique to increase the polygon count to smooth the surfaces and fix curves,” Fleming said. Then meshes are closed to form 3D solids for printing, and translucent polygon overlays (such as a tattoo or artwork on the avatar’s clothing) are converted to a printable form.

The resulting model is translated to the ZPR file format, and the model is printed on demand in full color using a composite material and shipped to the new owner. For detailed information about this process, see “How Rock Band Bandmates are Born,” which includes a short video. 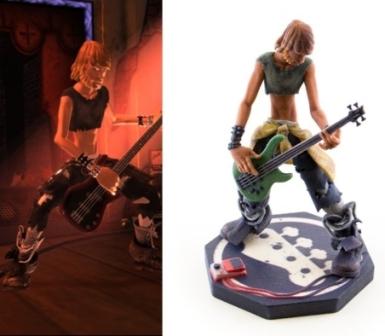 A Rock Band 2 video game avatar, before and after the 3D printing process.

Many people don’t understand at first that the models are a one-of-a-kind creation, unique to them and their own avatar. Scott Harmon, Z Corporation vice-president of business development, said people are amazed when they see the results. “The detail is incredible. It’s extraordinarily cool.”

Fleming was equally impressed when he saw the finished models. “The quality of the printing, the resolution, is incredible,” he said. “These are so fantastic looking. We couldn’t believe it when we got the first batch.”

“Orders are going up every day, with relatively little promotion,” said Harmon, estimating that the company has produced numbers well into the hundreds.”

One of Fleming’s greatest challenges was to ensure the accurate translation of game assets and all their permutations -- approximately 2,000 items total -- from their 2D video game form to 3D-printable data. Several hundred assets required reauthoring by hand, Fleming said, such as a necklace that would not translate automatically to 3D.

The service is part of an effort to foster the culture connected with the Rock Band game and expand the game’s reach and the creativity associated with it. Z Corporation was looking for new consumer applications for low-cost, color 3D printing, Harmon said, while expanding into the emerging entertainment market. “This is more than a video game. And it’s a market we can serve.”