At its Canton, Massachusetts, headquarters, Reebok uses the 3D printer to create models of outsoles and other thermoplastic components for shoes. Designers mainly use the 3D printouts to confirm contours and color as well as accuracy for mold making and manufacturability. Printed models are also used to check design concepts and aesthetics.

Footwear projects at Reebok usually require prototypes, noted Gary Rabinovitz, RP lab manager. These prototypes are required to save both time and money by getting the job done right the first time. By reviewing these prototypes, molds can be made correctly, avoiding the need for later modifications.

Reebok factories also are equipped with 3D printers. If the U.S.-based development team has a video conference with a factory or development center around the world, parties on both ends can produce identical models for discussion. 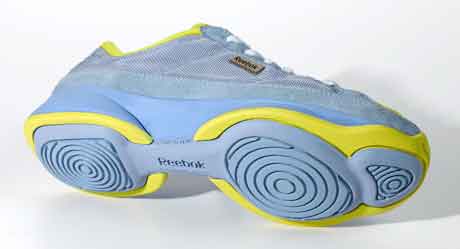 Reebok outsourced all rapid prototyping before 1998, then brought the process in house. "We used SLS [selective laser sintering], but we had way too many users and too much work for the person running the machine," Rabinovitz recalled. Management looked into other options and discovered the accuracy and fast turnaround time of 3D printing. "Our senior vice-president at the time took one look at a Z Corp. 3D printer and said, 'Buy it.'" That first purchase was a Z402 monochrome printer. "It produced concept models that were quick, inexpensive -- and ugly. But it served its purpose for seven years."

When Z Corp.'s Spectrum Z510 model arrived on the scene, Rabinovitz said, "We instantly knew it was right for us" -- so much so, that the footwear maker contributed to the printer's development. The Z510's high-resolution, 24-bit full-color capabilities, speed, and 10" x 14" x 8" build size hit home with Reebok's RP team.

The machine now runs all day, six days a week -- often 12 hours a day -- plus overnight builds. At two layers per minute, the speed of the Z510 is a great asset in the design development process, Rabinovitz explained. Smaller components print in as little as 12-14 minutes. "Sometimes we can make two or three iterations in the same day if a part is small."

"In the footwear market, you must get your product to market before the competition," Rabinovitz said. "Time is often more important than money."