Neri Oxman is an architect and researcher whose work attempts to establish new forms of experimental design and novel processes of material practice at the interface of design, computer science, engineering, and biology. But when this founder of the interdisciplinary design initiative MATERIALECOLOGY wanted to create a chair that promoted a lounging experience that was not only ergonomic in nature, but also experiential and stimulating to the skin, she turned to Objet's CONNEX500 3D printer to make her dream chair, named Beast, a reality.

"Beast is an organic-like entity created synthetically by the incorporation of physical parameters into digital form generation protocols," said Oxman. "It is a performative chaise aimed to fit its form to one's body contour and is inspired by natural forms that integrate structural and environmental performance, such as bone structures and other biological cellular solids." 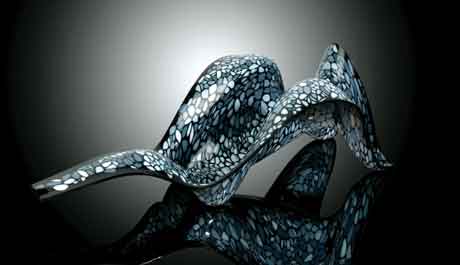 Here, Oxman aimed to combine the structural performance of a chaise lounge with a sensory experience while sitting or lying down. The entire piece was designed according to the prototyping capabilities of the CONNEX500. The chair's features -- stiffness profiles as well as global and local curvature descriptions -- are a direct result of the printer's mechanical and material properties. "The elastic modulus of each printing material was incorporated into the structural calculations and the type of sensation to go with it as the body rests on the chaise," said Oxman. "In this respect, Beast exemplifies a design process that includes the fabrication technology aPriori as part of the design constraint space. This is typical of my line of work."

According to Objet, the Connex500 is the first 3D printing system that jets multiple model materials simultaneously. It offers the ability to print parts and assemblies made of multiple model materials, with different mechanical or physical properties. It can also fabricate digital materials quickly, enabling users to create composites that have preset combinations of mechanical properties.

Oxman chose to work with 3D printing because it supports the fabrication and manufacturing of continuous surface structures that include multiple physical properties as part of the printing process. Hard and soft materials can be incorporated into one print without the need to consider joints and other connecting details. "Biological structures operate in a similar manner as matter is deposited locally with varied properties that correlate to external load, heat, and other environmental criteria," said Oxman.

Creating Beast
Beast combines structural, environmental, and corporeal performance by adapting its thickness, pattern density, stiffness, flexibility, and translucency to load, curvature, and skin-pressured areas. Multiple algorithms were generated that correspond to these variables such that stability is mediated with pleasure, and structural integrity with visual and sensual experience, said Oxman.

To cushion and support sensitive, high-pressured areas, a pressure map study was conducted. By analyzing anatomical structures that cause concentrated pressures, Beast becomes softer and flexible where pressure needs to be relieved. The relative volume of each cellular cushion is locally informed by pressure data averaged with values representing structural support and flexibility. Its density is informed by global and local mean curvature values, such that denser, smaller cells are organized in areas of steeper curvature, whereas larger cells are found in areas of shallow curvature.

Oxman transformed the traditional chaise to promote lounging of a different kind. It is designed as a 3D object that provides for multiple seating positions, each promoting a completely different experience. In this light, Beast celebrates the negotiation between engineering and experiential performance.

A graduate of the AA School of Architecture, Oxman is currently based at MIT, where she is a PhD candidate in design and computation. She promotes the aesthetics of material formation and behavior as a scientific contribution to ecological activism.