Most 3D printers are defined by their printing technology and the types of materials they use, rather than which items they produce. The DragonFly 2020 from Nano Dimension is an exception. It’s designed to produce only one thing: multi-layer printed circuit boards (PCBs). 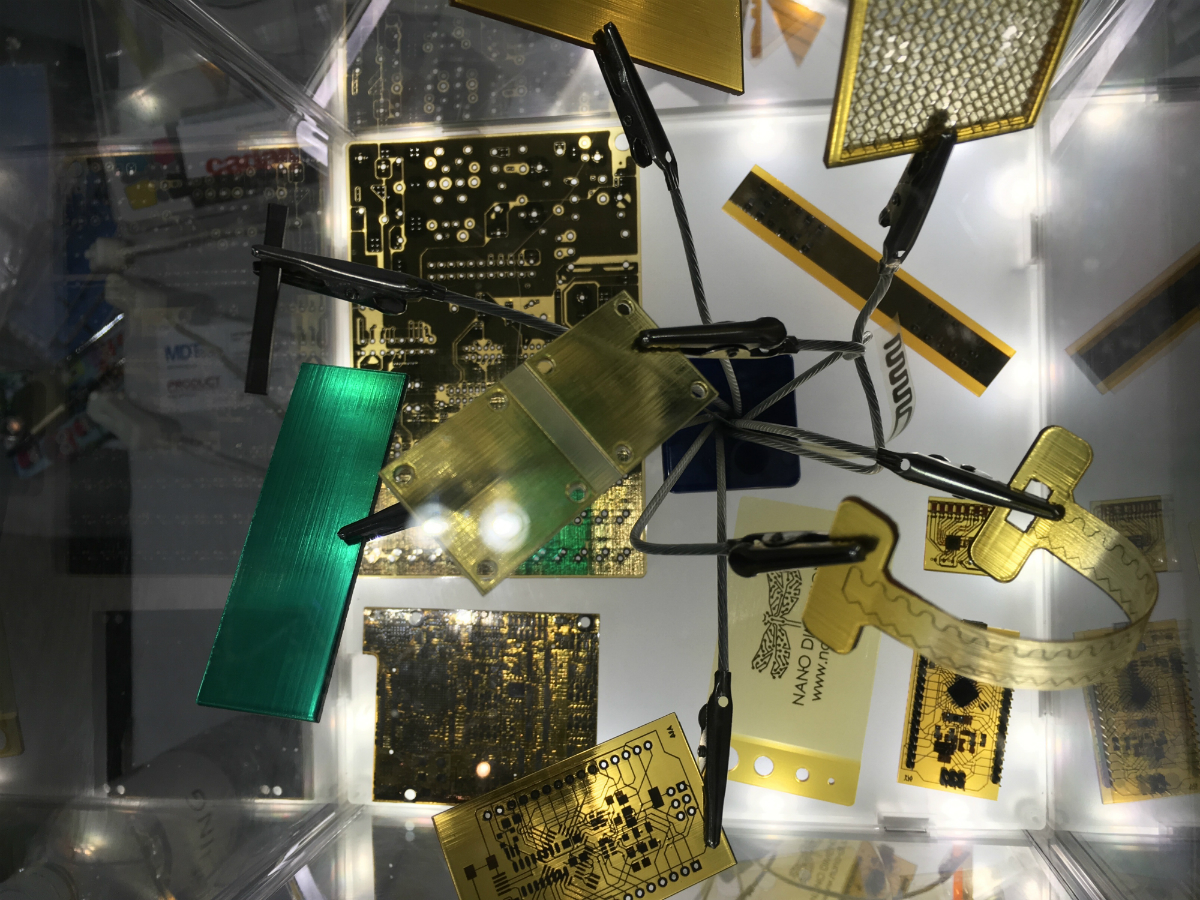 A collection of items produced by Nano Dimension 3D printing processes, including a flexible circuit (lower right) and PCBs with embedded components (detail below).

First, Nano Dimension’s software creates 3D-printable models from Gerber files (produced by Zuken, Altium, Mentor Graphics, and other electronics design programs). Then, using inkjet technology, the DragonFly 2020 lays down very thin layers of two kinds of ink in each print job: one that incorporates silver nanoparticles, and a dielectric ink made from a proprietary polymer. By depositing these conductive and insulating inks in the right areas, the DragonFly 2020 is able to create circuits.

“What we’re doing, essentially, is combining the world of 3D printing with the world of electronics,” said Simon Fried, cofounder and chief business officer of Nano Dimension.

All 3D printers can create niches or cavities in the items they build, by repeatedly adding layers of material outside designated areas. When this is done on a circuit board, it can create recesses that are tailored to the dimensions of electrical components. “You can essentially tell the printer what the shape of any given component is,” Fried explained.

Next, the components are placed in their corresponding recesses (manually, for the time being). “We flip them over, put them into the board upside down; that leaves their connective surfaces exposed,” Fried said. Printing then resumes over the components, with conductive ink eliminating the need for soldered connections.

With this technique, components don’t need “legs” (extensions for soldering) or complete packaging to be incorporated into the PCB, so they can be smaller than standard components, in turn yielding thinner PCBs. The embedding process will also increase durability of the PCB, Nano Dimension expects. “They’re likely to be more reliably attached ... they’re pretty much trapped in place,” said Fried. In addition, the encapsulated components are protected from external threats, such as corrosion and abrasion. 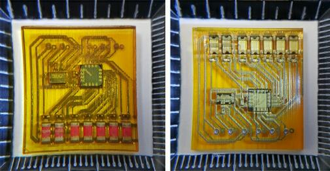 Front and rear views of a 3D-printed circuit board with embedded components. Image courtesy of Nano Dimension.

Nano Dimension is currently seeking a U.S. patent for this capability, and the company expects to incorporate it in future generations of its 3D printers.

The Power of In-House Prototyping

Giving users the capability to create their own PCBs in-house means they can prepare prototypes in one day; outsourced prototype creation, in contrast, can add weeks to design schedules. “It can have a real impact on the time to market,” Fried observed.

In addition, many customers prefer to keep their design data within their own company. In a recent study Nano Dimension conducted, 70% of its website visitors indicated that intellectual property (IP) security is a concern. “With a third party … inevitably, you’re going to have less control over who sees [your IP],” Fried said.

Although there is some potential for moving into smaller-scale manufacturing applications in the future, Fried doesn’t think 3D printing will replace high-volume traditional manufacturing anytime soon. “It’s a new application for 3D printing, so it’s a few years behind other [industries] in terms of manufacturing,” he noted. “For the moment, our focus is on getting things right for the prototyping stage.”

The DragonFly 2020 is currently being evaluated by beta customers including a U.S.-based defense company; a bank holding company, for use in its hardware development center; and PHYTEC, a Germany-based developer of microprocessor-based solutions for the industrial embedded market. “The bottom line with this type of technology is it really goes across industries,” Fried said, noting that they all share the same challenges: “How do I design faster? How do I iterate faster? How do I allow my design team to be more flexible … to fail faster?”

Nano Dimension plans to launch the DragonFly 2020 commercially later this quarter. Although the price hasn’t been finalized, it will be somewhere in the $200,000 range, Fried said.

Fried predicted that future developments may increase both the speed of Nano Dimension printers, and the number of materials that can be printed in the same job, by increasing the number of printheads. Switching to a copper-based conductive printing ink (currently in development) could reduce material costs to as little as one-tenth that of silver. And the component-embedding technology could be integrated with robotic pick-and-place equipment, eliminating the need for human intervention in placing components.

Eventually, component-embedding technology may allow for new kinds of PCBs that disperse components throughout a printed object, or even play a structural role, instead of the standard flat design. “You get to do more with less space than you could possibly do with a [standard] PCB,” Fried commented. “The ultimate dream is getting rid of the PCB altogether, but keeping electrical functionality.”