The Dimension 3D Printing Group, a division of Stratasys, wants to make sure you understand that its new desktop 3D printer is a personal machine -- not for a service bureau, not for sharing with the whole department -- just for you. To make that point, the company calls the model uPrint. (Watch the uPrint video demonstration.)

The machine itself was unveiled on Monday at the Dimension Resellers Conference in Anaheim, California. Priced at $14,900, it’s available to ship worldwide immediately, according to the company.

The new model stands only 2.5’ tall, has a 26” x 26” footprint, and features an 8” x 6” x 6” build area. The machine uses Dimension’s fused deposition modeling (FDM) technology to build models of ABSplus, a material from Stratasys that is said to be 40% stronger than standard ABS plastic. 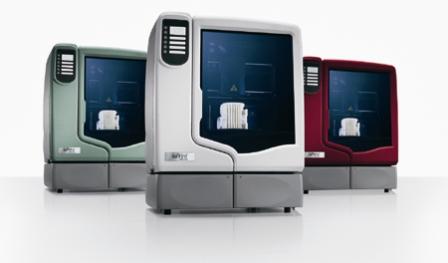 Whereas current printers in the Dimension product line are serviced and supported by Dimension resellers, uPrint will be serviced by a third-party service firm Stratasys has contracted for the purpose.

Coming to Your Desktop
“I have a vision to sell a massive amount of CAD 3D printers on every designer’s desk,” said Scott Crump, Dimension CEO. At a web presentation introducing the uPrint model, Crump reminded listeners that “3D CAD seat volume exploded into multimillions when it hit the $15,000 tipping [price] point,” so he anticipated the $14,900 price would create a similar mass appeal for uPrint, especially among “a new set of customers who have yet to incorporate 3D printing into the product design process.” Targeted buyers include mechanical designers, engineers, architects, animators, educational institutions, home inventors, and consultants, among others.

According to Shane Glen, Stratasys director of investor relations and a presenter during the webcast, “uPrint represents a significant advancement in our 3D printer strategy.” Part of that strategy might be to beat some of its competition in bringing a working desktop 3D printing unit to the market. He went so far as to call uPrint “the world’s first personal 3D printer.”

Competition for uPrint includes Objet Geometries’ Alaris 30, priced below $40,000 (the company declined to be more specific about the price), and 3D Systems’ V Flash, priced at $9,900.

Objet’s Alaris was launched in October 2008. Object previously relied on Stratasys, Dimension’s parent company, as the exclusive distributor for its Eden333 system in North America. The partnership ended in 2006.

V Flash was unveiled in September 2007. 3D Systems suspended sales of V Flash after its April 2008 launch revealed some performance issues. In its 10-Q filing with the SEC, the company attributed the delay to a “reported electrical noise problem.” V Flash is scheduled to return to the market in the first quarter of this year, in what the company officials described as a “carefully managed, phased rollout.”