If you're a member of the popular social networking site Facebook, you might find the color palette of SolidWorks 3D ContentCentral (3DCC) 2009 oddly familiar. The latest incarnation of 3DCC sports a Facebook-like interface, framed in white and blue, divided into two columns. In fact, many of the tools in 3DCC function like their counterparts in Facebook. The launch of this revamped portal signifies SolidWorks' faith in social networking as the way of the future. Previously, 3DCC was an online catalog; now it's is a supplier&ndash;buyer network.

More Than an Online Catalog

"Before 3D ContentCentral 2009, users and suppliers who communicated through online catalogs were restricted to exchanging CAD data," noted Fielder Hiss, SolidWorks' director of product management. "Now, with the social networking features we've added to 3D ContentCentral, they can have real conversations, compare their knowledge and experience, and help each other make better buying decisions."

The community building is made possible by features that allow part suppliers and part seekers to leave comments for one another, tag one another as "favorite," and inspect one another's profiles. 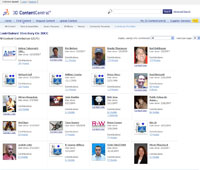 The site's uploading tool mimics Facebook's photo uploading tool. With a few mouse clicks, you could select a series of parts or assemblies from your hard drive to upload to 3DCC's server. Once the queue is in order, you publish them to the portal's searchable database, just as you might publish your vacation photos to your Facebook profile.

In addition to the 3D preview and 2D schematic view (powered by SolidWorks eDrawings), 3DCC gives you the Hyperview option, which lets you see the part close up in a magnified perspective. Suppliers with variations of the same product can tag different parts so that, when someone selects one part, similar parts automatically appear under the Alternate Versions tab.

Just as you could rate books and CDs on Amazon.com, you can rate 3DCC's content. This allows users to recommend parts with good geometry and downgrade parts they find unsatisfactory.

If you're a part buyer, you can browse by category (actuators, cylinders, knobs, and so on) or by supplier name. If shipping cost is a concern, you can also search for suppliers by region, allowing you to narrow your choices to those closest to the manufacturing facilities. 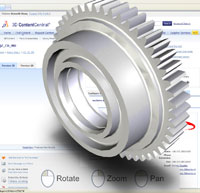 The latest version of 3D ContentCentral features Hyperview, which gives you a close-up perspective of the part.

Paul Grayson, CEO of Alibre, another midrange CAD software developer, graciously acknowledges its competition's work. "It pains me to praise SolidWorks," he said, "but I applaud the success of 3DCC and the recent extensions to make it easier for suppliers to populate it with their content. While we offer free parts libraries with Alibre Design, we also have many customers that use 3DCC. 3DCC incorporates some of the same parts libraries that Alibre supplies, such as TraceParts, but they have also done a great job of organizing and providing access to many more suppliers' libraries."

According to SolidWorks press officials, none of the services and tools on 3DCC requires a fee, and the company has not placed a limitation on the volume of files each member can upload to the site.

A believer in the proliferation of inexpensive CAD software (priced $1,000 or less), Grayson said, "The most interesting thing about 3D ContentCentral to me is that it is free and makes an excellent addition to a low-cost design platform." (Read more on Grayson's views at the Alibre blog.) 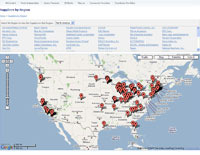 The option to search by location, powered by Google Maps, allows buyers to narrow their choices down to local suppliers. Click image for larger version.

SolidWorks' strategy to incorporate Web 2.0 elements in its products is reflected in CEO Jeff Ray's contributions to the company's blog and the appointment of a social media manager. SolidWorks' parent company Dassault Systemes joins the Web 2.0 movement by incorporating chat features into its product lifecycle management (PLM) tools like ENOVIA 3DLive.

SolidWorks maintains fan pages on Facebook, under the names SolidWorks Asia Pacific and SolidWorks 3D Design Software. Dassault Systemes has staked out a placeholder page, but has yet to create content.

One of 3DCC's top downloads turns out to be Homer Simpson, a SolidWorks assembly that depicts the famous character from the animation series. The model's creator, Chris Tabern, wrote, "As an assembly, it's absolutely awful and I'm horrified that over 18,500 people have downloaded it. I'm still waiting for someone to do a fresh one using the new freeform/multibody tools [within SolidWorks]." 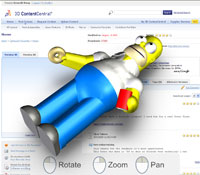 One of the top downloads on 3DCC turns out to be an assembly model of Homer Simpson.

Homer's popularity has risen since Tabern wrote that. Currently, at 57,200 downloads (as of January 28, 2009), it's more popular than the brushless square fan by member J. Wes Irwin (50,578 downloads) and the six-axis robotic arm by member David White (41,917 downloads). More than 450,000 registered users are on 3DCC, according to SolidWorks.