The seemingly small changes in this release can make a big impact on your productivity.


When I first saw the "What's New" list for Autodesk Inventor Professional 2012, announced on Tuesday, there didn't seem to be much to it. There were only 65 entries (as opposed to the usual 200 or so for most new releases of almost any software), of which 20 had to do with "Tooling" (aka Moldflow), and 9 involved Simulation. Most of the remaining 36 entries involve part modeling, with little or no attention paid to assemblies. None of the new or enhanced features seemed to be real attention-grabbers that would make a good headline for a product review. 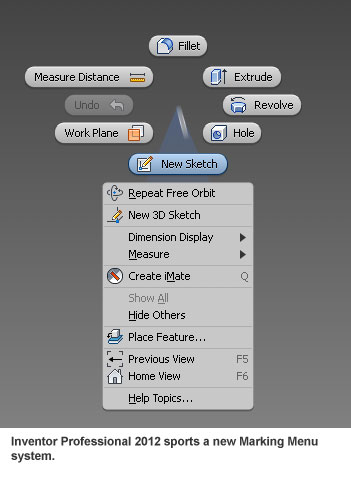 Closer inspection revealed that Autodesk's Manufacturing Solutions group has gone for quality instead of quantity. The individual changes may be small, but they have been thoughtfully chosen to help increase your productivity one step at a time, and collectively they really add up.

And On Today's Menu We Have

Let's start with the new Marking Menu functionality. Instead of foraging through the ribbon for commands (and Inventor's ribbon is still better than most applications), all you need to do is to right-click anywhere in the graphics menu. This brings up a context-sensitive halo of common commands surrounding the cursor, plus a panel listing of secondary commands. Move the cursor toward the command you want, click on it, and away you go! My use of the ribbon has dropped almost to zero.

To further improve things, there has been a significant change in the dialog boxes and mini-toolbars. First, the mini-toolbars that appear during operations such as Extrude, Revolve, Fillet, and so on have been improved and expanded such that the dialog boxes are hardly needed anymore. To this end, the second improvement is that the dialog boxes initially appear as a small bar with a drop arrow to open them, thus saving screen real estate. In addition, most of the mini toolbars fade away until you scroll the cursor near them.

The mini toolbars fade away (left) until you need them (right).


Here's another nice touch: When you select a face for a new sketch location, the model automatically rotates so the sketch plane faces you square on, as if you had also run the View Face tool.

Two enhancements can really help in analyzing part models, especially those with problems. First, the feature names in the browser tree can automatically supply additional information. For example, instead of just saying "Extrusion 3," the label can now say "Extrusion 3 (Join x 0.500 in)" to indicate the type of feature and its size.

Second, if a feature fails for some reason — such as a fillet with too large a radius — you can simply hover the mouse over the tree entry to have the model display the "last known good" version.

Here's a good improvement: Have you ever wanted to select a face that is hidden behind another? Worse yet, do you need to tunnel down several levels to select a desired face buried inside a part? Previously, after you paused for a second or so on the outermost face, Inventor would bring up the "two green arrows" tool so you could scroll down through the buried possibilities.

Now all you need to do is pause for a couple of seconds on a face, then you can see a drop-down list of all possible selections that are hidden behind the outermost one. As you scroll your cursor down the list, each item is highlighted in the model so you can verify it before making your final selection.

Here's Looking At Your Raster

Have you ever worked on the 2D drawing views of a very complex part or assembly? It can take a while for Inventor to perform all the calculations necessary for a precise display. Inventor Professional 2012 now has a "high-speed drawing views" capability. It is on by default, but can be turned off. With it on, you don't need to wait for Inventor to finish the precise calculations. Instead, it displays a fast raster image so you can view the drawing while the precise calculations are taking place. Better yet, you can even add many types of annotation to the underlying drawing, even though it is just displaying a raster image.

There has been much sound and fury recently about the relative merits of history-based versus history-free modeling. (Check out the CAD Smackdown podcast hosted recently by Cadalyst and moderated by yours truly.) Inventor Professional 2012 works both sides of the street, in that a former Autodesk Labs experimental program called Inventor Fusion has graduated to a full-fledged application. It is included with Inventor Professional 2012.

It can run as a stand-alone application, or it can be invoked from within Inventor Professional 2012. With it you can take a "prismatic" Inventor part and sculpt it into free-form flowing shapes, and then return to Inventor where the edits exist as an Alias Freeform object that coexists with the underlying Inventor part. Unfortunately it has little or no connection to the part as it exists up to this point, but new features can be added and constrained to the Alias Freeform object. 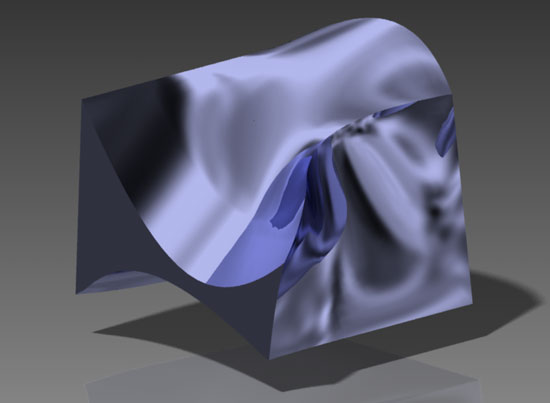 Believe it or not, this was a brick before I attacked it with Fusion.


The new Ray Tracing option is a fun toy; turn it on when in Realistic visual style to produce photo-realistic reflections, shadows, and diffractions in "real time" as you work. Okay, "real time" may be a bit optimistic, because recalculations take a finite time whenever the view changes. It took about 3–4 seconds on my computer if it was displaying a single simple part, but (very surprisingly) it only increased to about 5 seconds when displaying an assembly of more than a thousand parts. The time increased a bit when "clear" finishes were involved. Figure 4 shows a ray-traced blue chrome finish with full shadows and reflections turned on.

On the interoperability front, Inventor Professional 2012 includes updates to the translators for several other software brands and adds a new Rhino translator. There are also a number of improvements to the BIM Exchange and Revit Connector capabilities.

This has been a quick look at some of the many "minor" enhancements in Inventor Professional 2012, but I think you'll agree that they can all add up to a major improvement in how you use this powerful application.